Lots of Things! And Stuff!

Hello, friends! I've been having way too much fun these past couple weeks, and I do feel a little guilty about not sharing any of it with you until now. But I'll try to make up for it.
I know I blather about my gardening adventure a lot, but I'll save that for a couple sentences to let you know that when I'm done blathering about my garden, I'll end this post and do another post which will be a new free pattern! Woohoo!
So, last night there was a birthday party for the fiance of [Friend Who Bakes] and it was a blast. He's in a black metal band, very much about the Norse roots, but not in a racist kind of way (I guess there's a lot of that out there). So I knit him a Viking helmet. 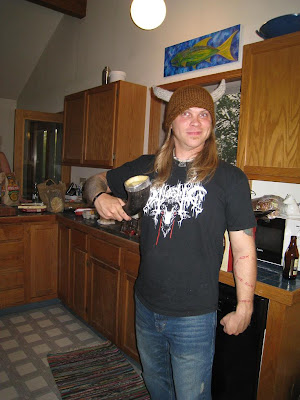 It was very last minute and I wrote down everything as I was making it so I could share it with my readership since I haven't posted a free pattern in a while and I've been promising the baby cardigan pattern for a while. Sorry it's not the baby cardigan! But it's a fun and super fast project!
And he loved it and wore it most of the night even though it's the middle of summer and the hat is made of wool. I made the kiddo model it for me, too, like I usually do with my finished projects. Bat-Viking! 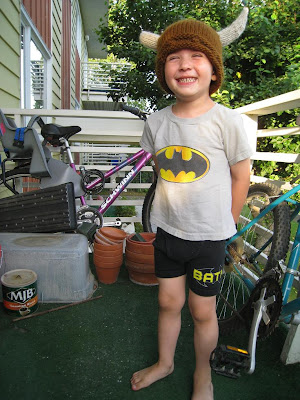 So, that's my knitting news, for those of you who aren't as interested in the garden, you may be dismissed.
But we had a good week in gardening! A few tomatoes, some cucumbers, non-garden wild berries, and a little preserving.
I'm not sure what the deal is with larger tomatoes, and I'm certainly open to tips, they just seem to be so bland! The little 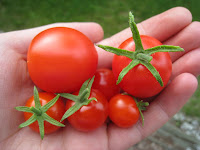 cherry tomatoes were impossibly delicious, and I only started liking tomatoes a few years ago, but the bigger ones, and they're not even that big, were just kind of bleh. I don't remember what variety they are, I wish I did. We have some Romas growing in the cabin greenhouse and I hope they taste good enough to warrant using again next year. The cherry tomatoes are so very good, but they're not exactly ideal for making anything with. Any suggestions on flavorful tomatoes?
I was also excited to see some pickling size cucumbers in the greenhouse! I like pickles. A lot. Especially tiny ones. I got a few ranging between an inch and a half to about four inches long, enough for a half-pint of pickles, and I was determined to have my half-pint of pickles. But there was something else. This is the first time I've ever grown cucumbers, so I have no idea what to expect. Being from Alaska, I know very little about warm-weather plants, and my gardening policy in general is to just see how it goes. Perhaps someone else can tell me. As I was looking around for cukes big enough to justify pickling, I came across TWO of these monsters: 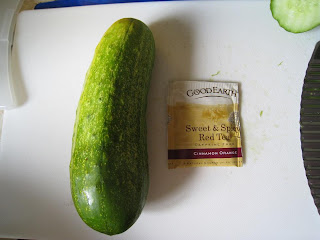 Where did they come from?! I think I was actually laughing to myself in the middle of nowhere over giant cucumbers. So I picked them, took them home, crinkle cut and pickled them along with my half-pint of tiny cukes. Two huge cukes = three pints of crinkle cut pickles. 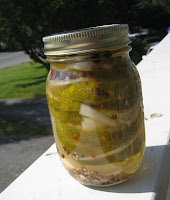 Crazy!
In addition to that, the kiddo and I wandered the property picking wild berries that ended up being enough to make a half-pint of jam with a little left over. I had some on my toast yesterday and it was pretty tasty! It's a little early for most of the berries here, so I had to mix three different types. Tart, sweet and unexpectedly flavorful. Later in the season I should be able to have enough to make batches of single berry jam. I think I just lost my punk rock lisence to being excited about preserving.
My last preserving adventure this week was zucchini relish. The sad part is, I had to buy zucchini. Our garden got a late start and I'm sure we'll have a bunch soon enough, but not yet. I bought local zucchini and carrots from the market though, so they're going to taste really good. Another thing I'll see if any of you know: Does the relish have to sit for weeks like pickles? None of the recipes I found said anything about it. Anyone know?
So, here's a jar of each, in all their glory. Hooray for preserving! 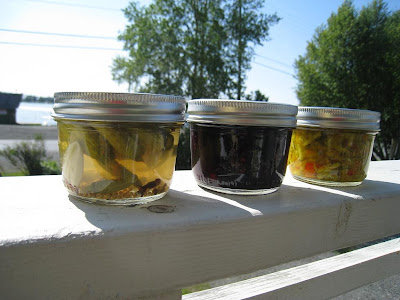 Now I have to go read some books to the kiddo and then I'll bang out the pattern for the Viking Hat!
Posted by Laura at 1:11 PM