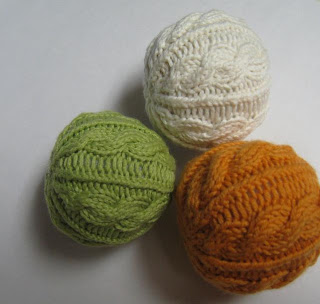 Maybe I'll make it a resolution for 2010 to blog more regularly. And get crackin' on the patterns I need to post. And get an Etsy store set up.
Anyway, I've actually been doing some knitting in the past month that I haven't been blogging. I get the Knitting Daily e-mails and they had a free pattern for some knit ornaments that I thought were cute. These are just the ones I have left. I think I've knocked out about 10 of them. Quick and cute, good little gifts.
My favorite local yarn store, Far North Yarn Co, got in some new yarn, Marshmallows. I'm not a big fan of novelty yarns, but this stuff is so squishy and cool! One ball makes a scarf in about half an hour. For about $11. Can't beat that!

AND! I finished my pretty cardigan out of the Debbie Bliss Alpaca Silk. I'm really happy with how it turned out! I finished it a couple days before Thanksgiving, but I had to enlist the kiddo to get a picture of it. I'll try to figure out some sort of pattern for this. I think it would look nice in a finer yarn, too. Experimenting to do! 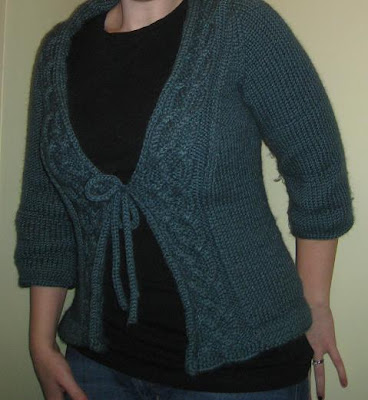 He also took this fabulous picture of me sporting my Noro top. I finished that this summer, but I don't think there was ever a picture. It's just a top-down raglan with yarn-over increases. I can't remember the name of the yarn. It took two skeins and I alternated skeins every other round so the stripes would show. 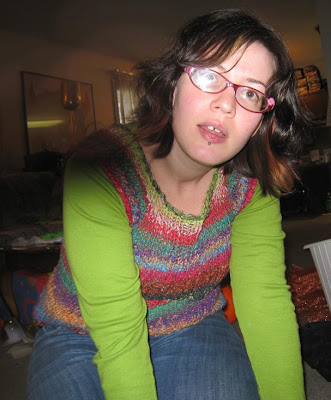 So, even though I've been neglecting you, my needles are still in use. In case I don't get around to posting again in the next couple weeks (likely), I hope everyone has a lovely holiday and new year!
Posted by Laura at 4:25 PM

Hi - I love those cable knit balls, do you have a pattern for them? Thanks!

I LOVE your sweater and would buy your pattern in a heart beat. I'll be looking for it!