HA! Made you look!

I know, I completely failed at keeping up with that blog thing for the last six months. In my defense, I'm pregnant...? Does that count as an excuse? Due March 28-ish, another boy! Oh boy... Also, I'm open to name suggestions, we're totally stumped.
The other little guy turned FIVE in September. It's blowing me away watching him grow and become his own person. I may be biased, but I think he's pretty awesome.
I have been getting a little knitting done, mostly small stuff. A few hats, a 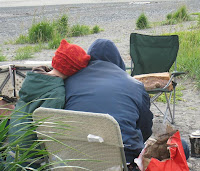 couple shrugs, that sort of thing. The only thing I have a picture of right now is the Double Cap (Kat Coyle, KnitScene, Fall 2008) that I made a while back. They yarn I used was a little finer than called for in the pattern, but I think it still makes for a darn cute hat. 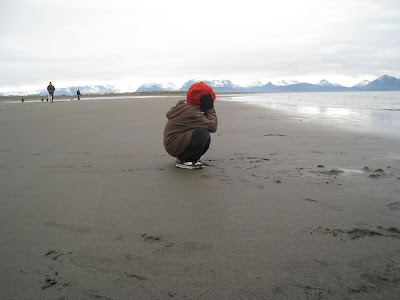 These pictures are from our camping trip in Homer in July. It was colder there in July than it is some places now in December. Alaska is still pretty amazing.
So, I really hope to keep up with this. Maybe a New Year's resolution. Did I do that last year...? Probably. We'll see.
I also really want to kick my butt into gear and get an Etsy shop opened up. I want to have a little something coming in when I'm taking time off from my real job with the new baby.
I hope everyone has a lovely holiday season, whatever you're celebrating.
Posted by Laura at 10:00 AM

Just found your blog via knitty.com, love your socktopia! Anyway, my husband and I met in Anchorage...16 years, and two sons later. I thought I would share our oldest son's name. His name is ALDRIX, he is named after ALbert einstein and jimmy henDRIX...my husbands two favorite geniuses.

I love Aldrix! That's an awesome idea. I'll have to see if we can brainstorm something like that, my husband and I are both very into music and literature.