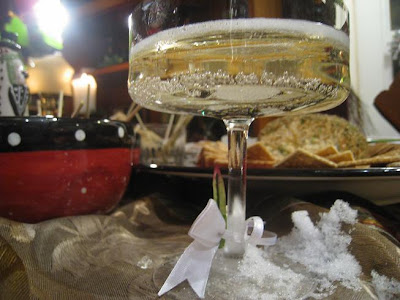 I hope everyone had a lovely Holiday of choice and enjoyed ringing in 2009!
I was lucky enough to spend time with many friends and much family over the last week. Christmas eve and day mostly spent with my extended family with plenty of good food and good company. I know I'm fortunate to have this life.
Last night was a blast! We were invited to a party at some friends' house and spent the evening into the early morning just having fun. We got to watch some fireworks and had a champagne toast at midnight outside in -20 cold. I wish there was a way to convey the feeling of being with wonderful friends, food, drink and ridiculously cold weather. I could bottle it and sell it for millions! 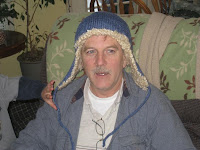 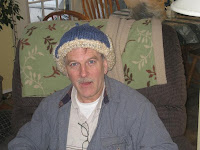 In the past week, I have not, however, picked up my knitting needles once. Thought about it a couple times, but I think I'm burnt out from gift knitting.
I made a silly ear-flap hat for my dad. He's already made good use of it. He has some property about 90 miles north of here and the temperature drops considerably in that 90 miles. I don't even want to think about what the temperature has been the last few days when it's been below zero here.
So, the hat was mostly knit in two pieces. Inside is some un-friendly boucle (supposed to look like fleece) knit on size 11 needles. The outside is a silk-wool blend that I lost the ball bands for, so I'm not sure what it is other than the fiber, knit on size 9 needles. Both pieces are top down since I just winged this pattern and had no clue how big to make it. The ties at the ear flaps are i-cord and the two pieces are just whip-stitched around the edge with the boucle yarn. Not too bad for improvisation. 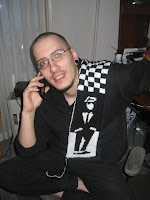 Guess what else I've been making progress on! The Skarf! Silly hubby saw the picture on here, so he knew I was working on it. I made him wait till Christmas before I unrolled it to show him the progress. It's still in progress, I can't seem to muster up more than 6 rows at a time lately. Still, he and I both like how it's turning out! My goal is to finish it in time that he can wear it this winter.
Being in Alaska gives me some good time to finish this. At least three months, probably more like four.
Which means maybe I can work on something completely selfish. I've been coveting some sweaters in a certain lingere and clothing catalog that look fairly simple and I think I could rip them off. They charge too much for sweaters and I have three giant plastic storage tubs of yarn. Once again, the Alaska advantage. Sweater season is half the year.
Happy 2009 everyone!
Posted by Laura at 2:08 PM