Whatcha been up to?

Oh yes! Who rocks the procrastination? Me!
I've been thinking about blogging, but really, there hasn't been much that interesting to write about lately. I got some fun new stuff this week though, so I figured I'd share! 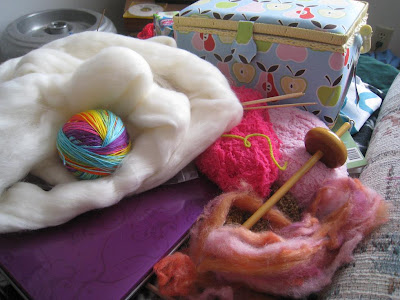 First thing to note is the GORGEOUS new bright striping rainbow yarn! A dear recently renewed friend was in town for the weekend and I managed to get a few hours to hang out with her. She is amazing! We pretty much lost contact (this makes me sound old) about 15 years ago. In that time, we've both gone through hellish teens and early twenties and have come out very similar! She knits! She makes soap! She pickles and cans and gardens! All this in her spare time because she's a 4th year medical student as well! I'm not edumacated like her, but crafty as hell. I'm absolutely psyched that our lives have met up again. We went on a field trip to a yarn store, 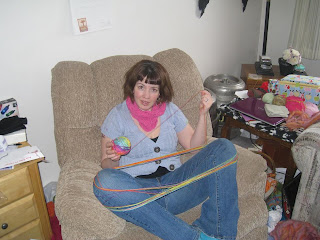 surprise, surprise! She bought me this yarn, she said for driving her around. Really, that's not a good reason! I only had to cross one major street to get to her and would have driven hours to get to see her anyway. So I'll be calling this an early birthday present (my birthday is next Saturday! Party!) instead. I was thinking I would finally get down to making a real pair of socks on teeny tiny needles, but (lucky me) this stuff is pure merino and I would hate to have them wear out too fast. I know, I could use nylon reinforcing, but I'm lazy. Plus, how cute is this yarn going to be for arm warmers?!
The yarn shop we visited also happens to be the only one in town that carries fiber for spinning, so now I'll direct you to that fluffy cloud of merino the rainbow yarn is resting on. Lovely. Since I took that picture, I've spun about half of it. It was only my third try at spinning, but I feel like I'm making progress! My goal is a Kool-Aid dyed two ply that I can use for a hat. Fingers crossed. I also have a full pound of Corriedale roving coming to me via eBay. Woo!
Last but certainly not least of my new goodies is the sewing basket. I've been eyeballing the thing for months and finally decided 40% off was worth actually buying it. I've been sewing lately and I've accumulated enough stuff to warrant buying a new sewing basket, as my old one was about six inches in diameter. I think I'll have an entire summer wardrobe of sun dresses this year. Last summer in Alaska was a total bust. I think we had less than two weeks total that the temperature went above 70. Really, it has to be better this year! I'm reaching the point in the year that the cold is getting to be too much. I'm ready for sun and skin and margaritas on the deck! Who's with me?!
Posted by Laura at 10:18 PM

Isn't it lovely catching up with "old" friends? I have a friend I've known since I was 4, and we still talk via email. Same thing happened to us - we're almost identical in a lot of ways!

Arm warmers! There is a cute fingerless mitten recipe on knitty that would make good arm warmers. Also, there is a mitered-square sock recipe that might do cool things with that yarn? :-)

I had fun visiting this weekend. Next time we need to find time to actually sit around and knit!

hi there
loved your blog just found it
cupecakes cute
would make nice pin cushions for christmas
was looking at the pictures of your projects please where did you find pattern for bluegreycable hat loved it would make nice christmas present for grandson and different color for grand daughter than you barbara wilson
babs@sierratel.com
loved rainbow hat you finished for mother and the pom poms where too much