Making Up For It / Famouser 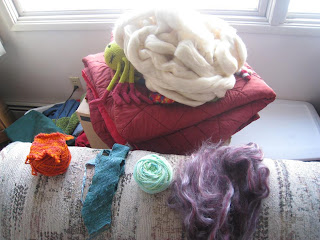 So, to make up for my previous procrastination, I kicked into high gear since the last post.
First, the cloud of merino has been spun, dyed and half of it knit into a hat! I really like dying yarn with Kool-Aid. Really. It's so easy and CHEAP. I'm all about the cheap. If you'd like to try it, but haven't, there's a great tutorial on Knitty. So half of it is this sweet pale aqua color, from apple and ice blue lemonade flavors and the other half is the very awesome bright orange with poppy, pink, red tones made by spooning mandarin and black cherry randomly over the skein. I've always been in love with the bright Orange You Glad shade that Brown Sheep has, but this puts it to shame.
Also recieved my pound of Corriedale roving, but it's just sitting there waiting to be spun. My thought was to crack down and spin and dye enough to make a half-sleeve cardigan, but it had to be put on the back-burner for now. Why, you ask? Because my dad's birthday (and mine!) was Sunday, the 14t 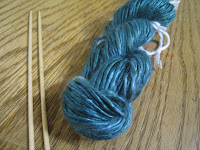 h. On Tuesday, I decided I wanted to knit him another tie, this time out of pure silk. I really like Debbie Bliss Pure Silk, but the only colors I could find locally were black (too dark to show), pink and purple. Damn. Hey, I could spin that and knit it before Sunday... And I did! Blo 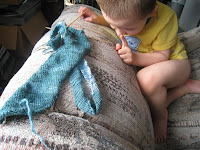 cked and everything, but it still needs to be backed and finished. He's a patient kinda guy though. So I picked up 1.5 ounces of this beautiful locally dyed teal silk roving, and, oh hey! That purpley merino-silk roving looks pretty too, I may as well get that...
Oh, hey! Guess what! One of the ladies at my favorite local yarn shop e-mailed me a couple days ago to let me know that Socktopus was mentioned in Country Living magazine! I'm really not into magazines and probably would never have known, but of course I had to go out and buy a copy. It's just a two or three sentance blurb about DIY with free patterns found on knitty.com, but to see it in print in a magazine was so COOL! The people around me probably thought I was crazy, grinning like an idiot at some magazine.
I picked up the Spring issue of Interweave Knits, too. I don't think I've ever knit anything out of the couple dozen knitting magazines I own, but they're so darn pretty to look at. Someday, you'll see.
Oh, by 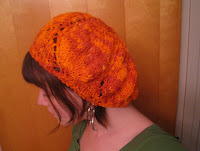