Oh yeah, I have a blog

It's been over a month since my last post. If you're still reading, you're probably one of two people. Hi guys!
Things have been pretty busy and I find I'd rather spend my spare time doing something other than blogging. I have some edibles growing in the garden and at home. The garden is some 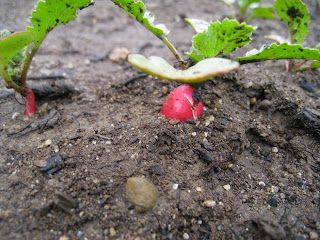 property about two hours away and I've added a 24 hour round trip garden tending to each week. It's fun though, I like to get out there. Especially since there's a mosquito magnet that really helps with the itch factor. I'm also growing tomatoes in buckets. My dad was headed up to the property tonight, so he took 4 of the 5 buckets to put in the greenhouse. I kept the 5th because it's the only one with fruit on it already and just in case he kills the others, I'd like to have one that makes it. We'll see. Mostly I'm worried about them getting burnt. It's too cold to have them directly outside, so they've spent their entire lives in my living room. As you know, it's just past Solstice and that means we're still having over 19 hours of daylight out of 24.
The garden takes up a lot of time, but I still get knitting in. I finished the Noro top, but don't have any pictures to show for it. Two skeins and size 15 needles makes a cute short-sleeved summer top and there's enough yarn left for half sleeves if you wanted to! The large gauge means it stretches to fit a range of sizes, I would probably say the single top would fit small through large.
I'm also fiddling with another Lillie cardigan, modifying a few things and getting the pattern worked up. But, of course, I interrupt myself with some sewing and starting more hats. 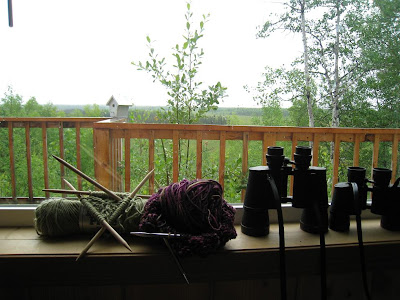 I've been thinking I should resolve to blog more often and try to keep my readership. We'll see how that goes...
Posted by Laura at 6:00 PM

I was wondering how you felt about other crafters selling products based on your patterns. We are talking very small time, not online.

P.S. I could not find your email anywhere otherwise I would have emailed you.