Friends, I have a problem. My problem is procrastination. I do believe I've had it most of my life.
But, I finally got around to posting the pattern for that baby cardi! Woo! It's at the expense of some current projects, but, hey, those don't involve getting a free pattern to my readership.
It recently started getting a little chilly, as I mentioned before. I took this picture a couple weeks ago. It was sunny and gorgeous in most of the city, then right at the edge, dark clouds and snow creeping down the mountains. 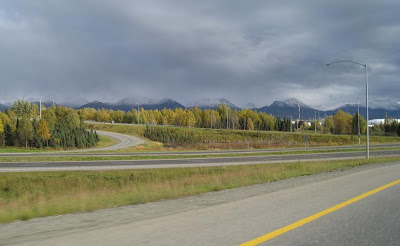 The past few days are giving me hope for a longer fall, because summer is definitely over here. I can hope there won't be snow for trick-or-treating, though.
The chill in the air got me furiously knitting that Alpaca Silk cardigan and I knit most of a wearable garment in about 4 days. Sounds quick, but it's on size 10 needles, I'm a cheater like that. The plan is to make a wide band that is the finishing around the fronts and neckline. That's the killer. I've managed to get about 10 inches knit in two weeks. It's a pretty cable pattern, but not so difficult that I shouldn't be completely done by now and wearing that thing out in the pretty fall weather.
I just decided to start knitting something else instead! I'm tentatively working on a stash of items for a local eco-chic boutique, scarves, hats, simple things like that. Thing is, the first scarf I made, I ran out of yarn half-way through the bind-off. Seriously. And it's knit lengthwise, so I can't just undo a row. So, I'm having a glass of wine and blogging.
That, dear friends, is why you have the cardi pattern now. The shame.
Usually it's the finishing that kills me. I promise that most, if not all, of my patterns will have the least finishing humanly possible, for myself and you. That cute leaf purse I made for my friend (should I make a pattern for that one?) nearly killed me. It was absolute torture sewing the lining to the outer. I had two inches left of whip-stitching, no problem, and it took every bit of my willpower to finish it instead of cleaning the bathroom or going for a bike ride. Anything but finishing, in both senses.
That's my rant on procrastination. I'm going to go finish my wine and probably watch a movie. I don't feel guilty!
Here's my favorite recent picture. A very small 40 year old yuppie in the back seat of my car: 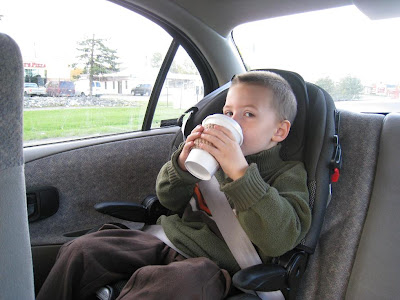