Hey, if anyone is still with me, I'm sorry. I'm totally done making resolutions and getting my hopes up about writing regularly, it never seems to work. Only now I have an excuse. He's warm and tiny and mumbly and currently sleeping on my chest as I'm typing. 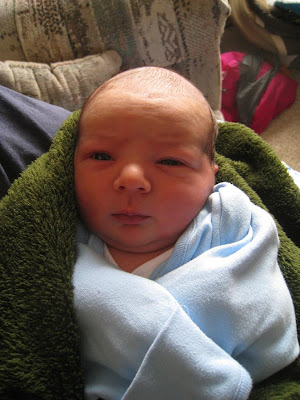 This is Ash. Just Ash. Not Ashton, Asher, Ashley or anything else.
He's the reason I'm sleep deprived and not getting much done these days. Totally worth it.
My knitting has been pretty minimal in the last few months, even before he was born. I'll talk about that in a minute. But first, I'm sure you all want to hear the story of the day Ash came into the world. Or not, but I'm telling it anyway. For posterity, right?
So, the official due date (which means pretty much nothing) was March 28. I was really hoping for 2 weeks early (totally unlikely) because my dad and I share a birthday and three generations would be pretty awesome. But I was still waiting on the 28th, and the 29th...and the 31st.
On April 1st, I got up, took Milo to his last day of preschool and went to work. Having Braxton-Hicks contractions all day, and totally ignoring them because I'd been having them for the last few months. Took cupcakes to preschool as a special last day treat. Back to work. Talked to the hubby on the phone about my day, it was our anniversary so we were talking about going to a movie that night. Went to pick up Milo from school, gathered all his stuff to take home, last little bit of chatting with teachers and other parents. Aaaand my water broke. So they helped me get everything to the car, I called Hubby, Mom, Dad (who was 2 hours away at his cabin and was going to watch Milo), midwives, and Friend-who-bakes. Made it to the birth center parking lot before I had another contraction and it wasn't much. So it's about 5:45 at that point, and I'm in soaking pants with none of my stuff and a bored 5 year old. (Ash just snorted really loudly)
My midwife wanted me to hang out and walk the halls and stairs for at least an hour to see how things were progressing. So my mom came and picked up Milo and I wandered around calling and texting everyone to let them know what was going on. Oh, technology. Around 7:00 the midwife checked me out, only at 5cm, but the contractions were getting stronger so we decided it would be best for me to stay. Called and texted everyone again and decided to sit on the floor instead of walking around. I really like the birth center experience, I want to sit on the floor, fine. I want to sit on the ball, fine. I hate the ball and roll it into the spare room, fine. Couch, fine. Back to floor, fine. Just before 8:00 Hubby shows up with friend-who-bakes. Mom arrives with Milo. Dad arrives to pick up Milo, Mom stays. Good timing because the next 4 contractions take me from concentrated breathing while standing and swaying, to gutteral screaming on the floor. So they help me up and to a bed. I only vaguely remember, but friend-who-bakes tells me, the student midwife was feeling bad that it was happening so fast and was trying to comfort me, telling me, "That's your baby's head..." and I yelled, "I KNOW!" Friend-who-bakes laughed, then felt bad for laughing.
So Ash was born at 8:31 pm. 9lbs 4oz, 21 inches long. Again, Friend-who-bakes tells me as he was coming out the midwives were kind of going "woah!" at the giant baby, but I was just trying to get him out.
This was a totally different experience than my long, slow, totally in control labor I had with Milo. I would prefer that one over short, super-intense and emotionally jarring any day.
So, that's how it went down, and now we're a family of 4 and it's pretty great.
If you've stuck with me til now, I have my tiny bit of knitting news. On my last trip to the yarn shop when I was still pregnant, Milo found Rebecca Danger's Big Book of Knitted Monsters on a bottom shelf where it caught his attention. Since he's always so patient with me when I'm yarn browsing, we got it and he picked out some monsters he wanted. I have to say, they're pretty addicting! I've made 4 so far, but I only have a picture of one. 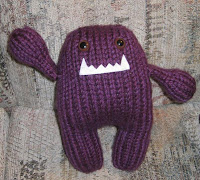 This is Coco, the canister monster. All the monsters have names and stories to go with them. Sometimes Milo picks out this book as one of his before bed stories. Pretty dang cute, monsters and kiddo.
The boys also got me an awesome gift card to my favorite yarn store for Mothers' Day. I went in a few days ago and they just got in a ton of new yarn. I didn't buy anything yet, I need something I really want to knit. Any suggestions on a pattern? I'd really like to have a perfect cardigan, but I'm not sure I've found what I'm looking for just yet.
Well, I'm off to get a couple hours off sleep before it's baby feedin' time again. I'd like to say I'll write again soon, but no guarantees.
Thanks for sticking with me! 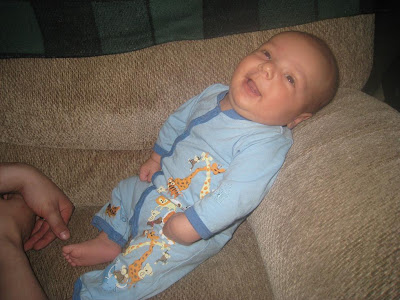