So, the nights are getting longer. Today, the official sunrise was 9:52, sunset 3:43. Sure, there's some residual light, but it can get to me. What do I do to cope? Get a fabulous purse that puts off it's own glow! 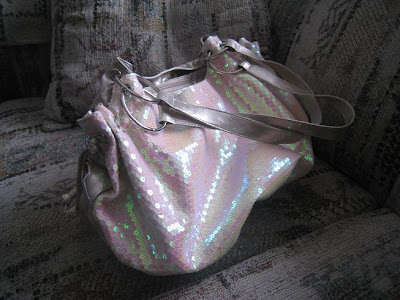 I get the range of reactions to this. I have the ever tactful, "Oh, it's...nice!" The friends who know me well enough to know I don't care that they say, "That thing is HIDEOUS!" And one or two friends who actually have the same taste as me and think it's wonderful.
Here's the fun part: The way the purse is constructed, the two outside pockets (which both have zippered pockets attached) are only half the depth of the middle. This means that I'm not losing my keys/wallet/pen/whatever in the depths of side pockets aaaaaand the deep middle pocket is big enough for one medium or two small sized knitting projects!!! 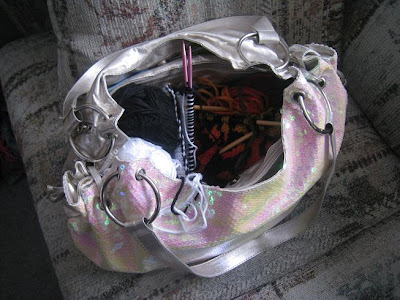 Sheer sequined awesomeness!
So, you see the rainbow hat is one of the projects in there. The other is the Skarf. It's horribly slow going, I'm far enough along that I refuse to rip it, but every time I work on it, I swear I will never double knit again. I took this picture of it a few days ago, there's a bit more progress, but this is the start. 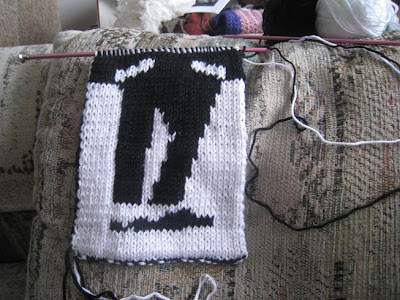 I'm pretty sure the hubby doesn't even look at this, so it's safe to post the picture.
I got to proofread my pattern for Knitty and the anticipation of go-live is killing me! I'm really psyched about it. Not saying anything before it's actually out is the biggest secret I've kept in a long time. I obsessively check the site a few times a day since I proofed the pattern.
I'm out of steam for tonight. I think I'm going to slip into my new footie jammies (the kiddo likes it when the whole family wears them) and spend a calm evening in.
Posted by Laura at 4:56 PM

i can't wait to see the end result of the skarf!