Okay, so the rainbow hat was tossed aside for more cupcakes. They're so fun! And fast! 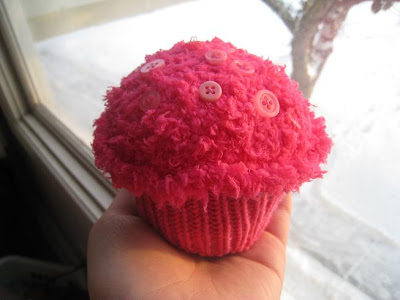 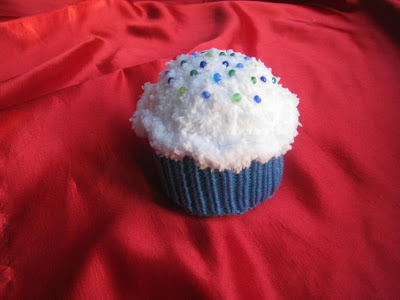 The bigger pink one is also for my dear birthday girl, but it'll probably be sent with her Christmas package. The blue one is for my brother-in-law's girlfriend...she calls him cupcake! Very cute.
I've also started some more projects. It happens. The Skarf for dear hubby is slowly progressing and I have decided that I will never again double-knit. Hate it! I would rather use intarsia to knit two scarves and sew them together...it would go faster. But I've already started and I'm not ripping that out. Plus, it's starting to look very nifty, I'll get a picture up soon.
In addition to the tie for my dad, I wanted to make him a hat. Not just any hat. I'm working up a sheepskin-looking ear-flap hat, the kind where you can tie the ear flaps up on the head. Did I mention nerd runs in my family? He'll love it.
So, since it's the weekend after Thanksgiving (hope everyone had a lovely time!) and I do my damnedest not to go out when that many people are trying to save, I'm thinking I'll go put up some lights and paint some ornaments. Maybe con the kiddo into helping. Being three, his artistic skills are in development and we NEED to paint! Not sure if the snow is going to stop or get worse, so maybe I'll put up the lights first...
Have a lovely weekend!
Posted by Laura at 12:03 PM

Where did you get the pattern for the cupcake? They are awesome!
I am going to make a socktopus as soon as the holidays are over- yay!

They look delicious. Perfect for a new years resolution. Cupcakes have been on my mind, since I got the Hello Cupcake book for Christmas. Please post the pattern, if possible. Many thanks and Happy New Year

I love these cupcakes! My birthday is on Friday and I am going to make myself one to celebrate! Thanks!

Where did you find that pattern? I have seen so many cupcake patterns and they all look a little wonky but this one! Pretty please let us all know. :-)