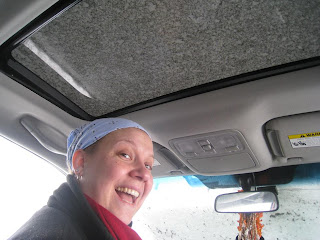 Hooray for spa weekend! A couple friends and I decided to take a trip to Alyeska, stay over night at the hotel and spend too much on food and drinks, go swimming and get massages. It was great! Alyeska is a ski resort, but that wasn't on the list of things to do. Which was good, because Mt. Redoubt blew, there was ash and the lifts were closed early on Saturday. We just watched from the indoor hot tub. It snowed Sunday morning though, settled things down a bit. The inside of the car had a lovely view though!
I thought about taking my laptop with me. I thought about taking a knitting project with me. I did neither and I'm really glad. 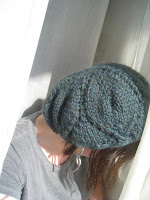 I finished the second Lacy Leaf Beret beforehand. I like how it turned out! Misti Baby Alpaca Grande is a tasty yarn choice! Smooshy soft and warm, great for a trip to a ski resort. I'm still in love with the Kool-Aid handspun though. Fun stuff!
Also working on a new Socktopus. This one is for my aunt who didn't want to give up the orange one as a baby gift. 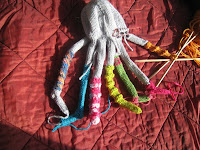 In other crafting news, I've been making pants for the kiddo. Mostly from the hubby's old t-shirts. The cat-in-the-hat ones are my favorite! If I can talk him into modelling them, I'll have some pictures up soon. He has no problem letting me know I drive him crazy with the trying everything on and taking pictures. Would anyone be interested in a sort of DIY t-shirt lounge pants pattern? I'm still trying to decide wether to make pants out of the KMFDM shirts or piece them together in a quilt...
Posted by Laura at 8:53 PM