It's spring! For real! I'm SO excited! Last summer was an absolute bust here. We had a total of less than two weeks that the temperature went above 70F. In town, that is. A couple hours north there were some nice 80 days. On top of that, there was a day in late April when it snowed 24 inches in 24 hours. Lucky me, I was in Colorado, but I really feel for everyone who got stuck here! 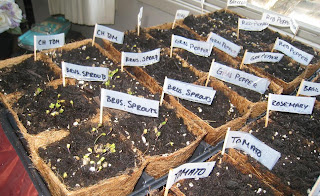 So, seedling time! My dad owns some property about two hours north of here (coincidentally) and he's got it into his head that there needs to be a huge garden there. Guess who's in charge! So, what it seems to mean for me is traveling up there about once a week to do major tending. Basically we're going to be growing stew. Potatoes, carrots, parsnips, tomatoes, that sort of thing. And I get a little corner for salad stuff.
I planted some seeds on Friday and already all the brussels sprouts, broccoli, basil and cherry tomatoes have sprouted! I'm totally awed by the visible change in seedlings over the hours. I know it's a little late for starts, but this is an experimental year. At worst, we'll have to buy starts from a nursery.
Spring also means it's time for iced tea! Real iced tea with lemon, and if I'm feeling ambitious, pureed fresh strawberries...oh, summer in a glass!
I also get motivated to cook more! Sure it's not the most season appropriate food, but there's a Guinness beef stew on the stove right now that smells soooooooooo good. I fell sorry for my husband, because there is no possible way it can taste as good as it smells. (The only meat I eat is fish and seafood, but the man likes his meat.) My dinner was damn tasty too, in case you were wondering! Jerk shrimp with rice and a super-salad. I like salad, real salad with green lettuce and lots of extra veggies tossed in. Olive oil and balsamic and a little basil...yum.
Okay, enough of that! What have I been knitting?

I made a little set of cupcakes for a friends' daughter for her birthday, it was kind of hard to part with them. Also made a little shrug for the friend, her birthday was yesterday and she likes to ogle my black and white shrug. Hers was black and maroon and shorter in the sleeves, but she loves it, so I'm happy. And she still wants a black and white one.
Also working on a stack of Lacy Leaf Berets. I think I'm going to knit and stockpile untill fall and open an Etsy shop when the weather starts to cool down. 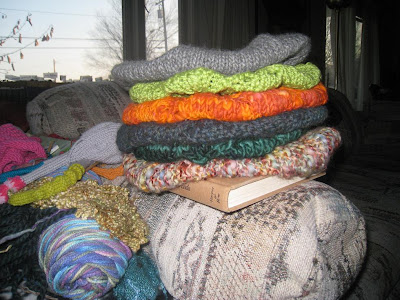 Spun some of that Corriedale wool I got on Ebay, really not impressed. It spins really easily, but the fibers are pretty coarse and the finished yarn doesn't give me the ooh-ahhs. I'm the sort of person who gets an idea, does it, and deals with the consequences after the fact. That is why there is strawberry pith well attached to that yarn now. I had some black tea from last year (iced tea!) that is old and bitter and pretty much unusable, so I figured I'd try to dye the yarn with it. In a saucepot on my stove. Turned out pretty pale caramel colored, not bad, but not terribly interesting. But wait! I had some strawberries that were turning grodie, why not mash them up in a little water and brew out the pink?! And throw in a few frozen blueberries for good measure, those things stain everything... And just throw the yarn in there with all the mashed fruit. Yep.
Doing some sewing, too. A friend (the one that bakes!) got a new sewing machine and I'm supposed to be imparting my sewing knowledge, such as it is. Although last night we just drank margaritas and talked about sewing. Just as fun!
Another fun thing, I got new glasses. Sure, that doesn't seem so interesting, but I've had my eye on these babies for about 5 or 6 years. Finally decided I needed to get new glasses (I wear contacts most of the time) and I haven't taken them off since. Expensive, but I've been in love with them for so long! Dig the little flower! Pure awesome! 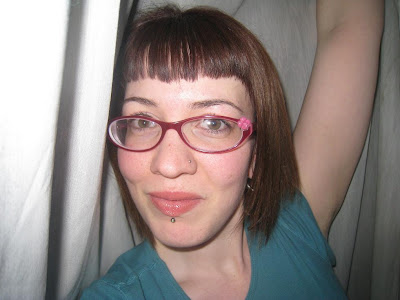 So HOORAY for SPRING! No strawberry pith is going to ruin my mood!
Posted by Laura at 8:50 PM