I'm sorry, did I promise pictures of yarn and spring? Sorry, I lied, something more important came up. My son had his first visit to the ER. And I'm going to tell the story!
I'll start out by saying he's fine, you don't have to stick around if that's all you wanted to know.
So, we got together for our first play date with a friend of mine who has three boys 8, 5, and 3, just right for going bonkers in the play area of a particular mega fast-food chain of the Irish persuasion, if you catch my drift. And the kids played, then ate, then played, then had some ice cream, then played some more and two minutes after I said, "Just a few more minutes, it's past your bed-time!" he bounced off another kid and into one of the padded poles. Now, these poles have padding held on with these little bands that probably break a lot. Because the high-traffic area padded poles mostly have the padding held on with zip-ties. So, as my son bounced off this pole, one of those poorly cut zip-ties happened to be right at the level of his forehead. I watched him bounce off and fall down, I saw a spot on his forehead turn red and as I was getting up to see what happened, blood started gushing down his face.
Side note: I really try not to exaggerate unless it's for humorous purposes and there's really nothing humorous about blood gushing down my only child's face.
Side note: I'm not an over-reacting parent. I have only taken him to the doctor outside of regular check-ups three times. The first was when his penis was dripping blood after his circumcision didn't go quite perfectly (but his wee-wee is fine now!), the second was when he had a full body spotty-rash and the only reason I took him in was because we were going out to the middle of nowhere for the weekend. And this is the third.
So, I grab him, run back to the table and grab a napkin for his head, my friend is trying to help get the blood out of his eyes. Another couple came over to help, the husband was a chiropractor, so he had some medical knowledge and, with the best intentions, tells me it's probably not as bad as it seems, head wounds tend to bleed a lot. So I lifted the napkin for a second and got, "Oh..."
So, of course it's the one time I don't have my phone. But this other couple helped us get to the emergency room, he drove so I could keep a napkin on the gash. She followed and they went home when we got in, but gave me their phone numbers (I called and thanked them profusely on their voice mail).
My mom met us at the ER, I called her from the couples' phone, but called my husband at work from my mom's phone at the ER.
So, at the restaurant, the kiddo cried for about ten seconds then just dripped tears a little. He's not much of a crier and usually gets mad at me if I try to console him when he gets any kind of minor boo-boo. So, as we're cleaning him up and figuring out how to get to the hospital he says, kinda quietly, "Mama, I'm gonna be okay..." If I hadn't been in do-something-now mode, I probably would have cried. He's such a tough cookie. He even feel asleep on the way to the hospital. And don't get all upset with me, he was talking and acting totally normal and I was checking his eyes. It was just past his bedtime and he had been playing for nearly two hours before.
So, the two hour ER visit went fine, he was bored, but got to have a pirate cotton-ball strapped to his head for a half hour and then "they glued me back together!" Which, really, I was glad it was the glue and not sutures. The doctor said there may not even be a scar (which I doubt) or that it would be pretty small. And might I say, if there's something that can get the hackles up on the coolest of parents, it's a harsh doctor asking the nurse for the [pointy metal tweezers] because there's some fatty tissue that keeps wanting to come out of there. Lady, it's a REALLY good thing you numbed him up first, don't think I won't take those tweezers to you!
That's about it, then. The little guy didn't seem to mind anything, the nurse said he was easier to work with than some 16 year olds. Plus, he got THREE stickers when we left!
This picture is a little dramatic... 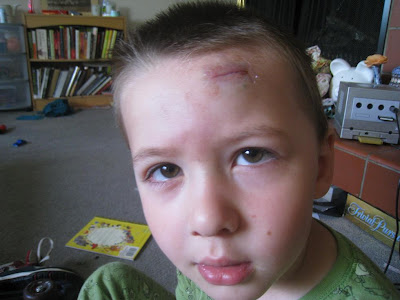 Because he's totally fine and it's difficult to keep him chill enough not to rip the damn thing open again. 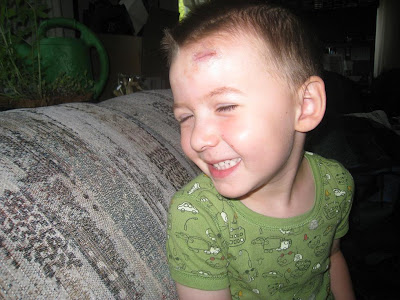 Hi, I come from time to time to read your which I appreciate. I'm sorry for what happenned to your son and glad to see he's OK. Well, he's quite a courageous boy.

When I was little I got cuts on myself and I didn't even know how I got them. When they are young they tend to hurt themselves a lot. Try to tell him to be more careful next time. He looks pretty happy though for someone who a injury like that. Those paddle poles scare me now.