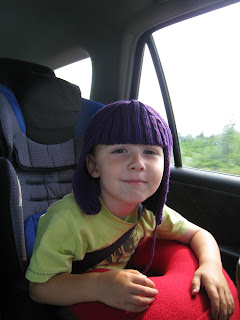 So, of course, I meant to have more pictures things I've gotten done, but here's a start. You'll just have to check back for more later!
Because there's pictures of the wig, but not of the other two hats I'm working on. Special wig and hats for chemo-head. Not the kiddo, he's just the model.
And I have yet to get a picture of the cute sweater I knitted out of that Noro. But stick around, baby, I can change! I've just been busy with summer. I need to get as much out of it as I can! The long days are amazing, but they're getting shorter already. We actually have to turn the lights on around 10:30, ridiculous. But we got a ride-along bike for the kiddo, since I hate trailers and he was too big for the plastic baby seat thing last summer. I love it! Some of the cheaper ones, people are giving bad reviews because the rear wheel locks up. We had the same problem once or twice, but it can be easily fixed by holding the pedals and pulling the wheel against them to tighten what's inside. No problems since, and it was $120 cheaper than the exellently reviewed REI models. But no pictures of that either.
I picked my first crop at the garden two weeks ago. Radishes are so gratifying! Picked the rest of them yesterday. Also have a second round growing. 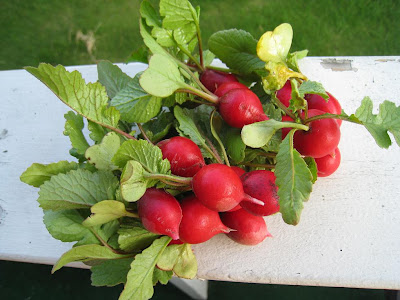 OH! Guess what else! I've been really excited about trying pickling since we started this garden, so a couple days ago, I had my first attempt. My brother-in-law's birthday is in September and I'm %99.9 sure he hasn't, doesn't and won't read my blog, so I can post this. He likes spicy stuff, so I thought this would be good. He doesn't get them all, though! 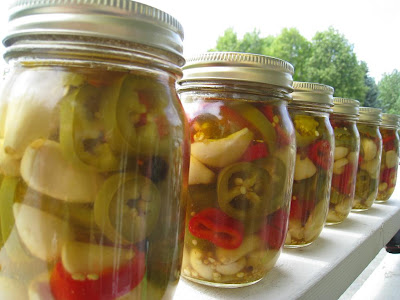 It drives me nuts that they have to age, I want to see how they turn out!
Here's how I connect gardening to knitting: I really really want to knit a fruit and veggie basket, including the basket.
Posted by Laura at 8:37 PM